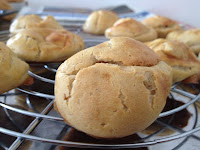 I was not convinced about doing this recipe, as I really do not like Profiteroles or anything alike. There are some other german names for sweets made of the same batter: Windbeutel, Brandteigkrapfen or Liebesknochen (the latter have a different form but the same batter and filling) - and I like none of them. But one of my colleagues occassionally mentioned the she loves profiteroles, even the more when they are plain, unfilled and already one day old.

Doing it was a mess. I had the feeling the batter was way too liquid. I was not able to place it on the baking sheet as I thought I should. The batter made small "lakes" on the sheet. Unfortunately, I put the first sheet in the oven and decided to make some modification before waiting how this first sheet turned out. And while there was already almost one cup more flour included in the batter, the "lakes" started to firm and puff... 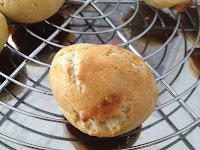 Anyhow, the second and third sheet were much easier to handel. I was able to make small "mountains" that did hold. But in the end, the profiteroles tunred out more in the shape of cookies and did not really puff or fall down again when I took them out the oven. I guess the excessive flour made the dough too heavy.

However, I brought them to work and my profiteroles-loving colleague enjoyed them. As most of them did not puff (in the pictures you see the only three or four that turned out fine) I did not cut and fill them but put some chocolate and vanilla pudding besides.

If you like profiteroles in general then for sure these Espresso Profiteroles are an excellent option. And - in the end they are easy and fast in the making, once you find out how it works and as long as you trust the recipe :-]
Therefore, have a look at p. 411 in Dorie Greenspan's book and/or see how the recipe turned out for the other bakers of the TWD-group!
by alvarosa um 00:30