I know "pudding" in english and in german isn't the same. But despite some british Christmas Pudding, which I have to say I am not a particular fan of, I never had or saw one. So I thought all puddings are like that. But when I read this recipe I thought, well, that all sounds familiar. Very familiar. And after some net-search for pictures of this recipe I was sure: Bread pudding, or at least Apple-Apple Bread Pudding, is very, very well-known in Austria - just with another name, for sure. 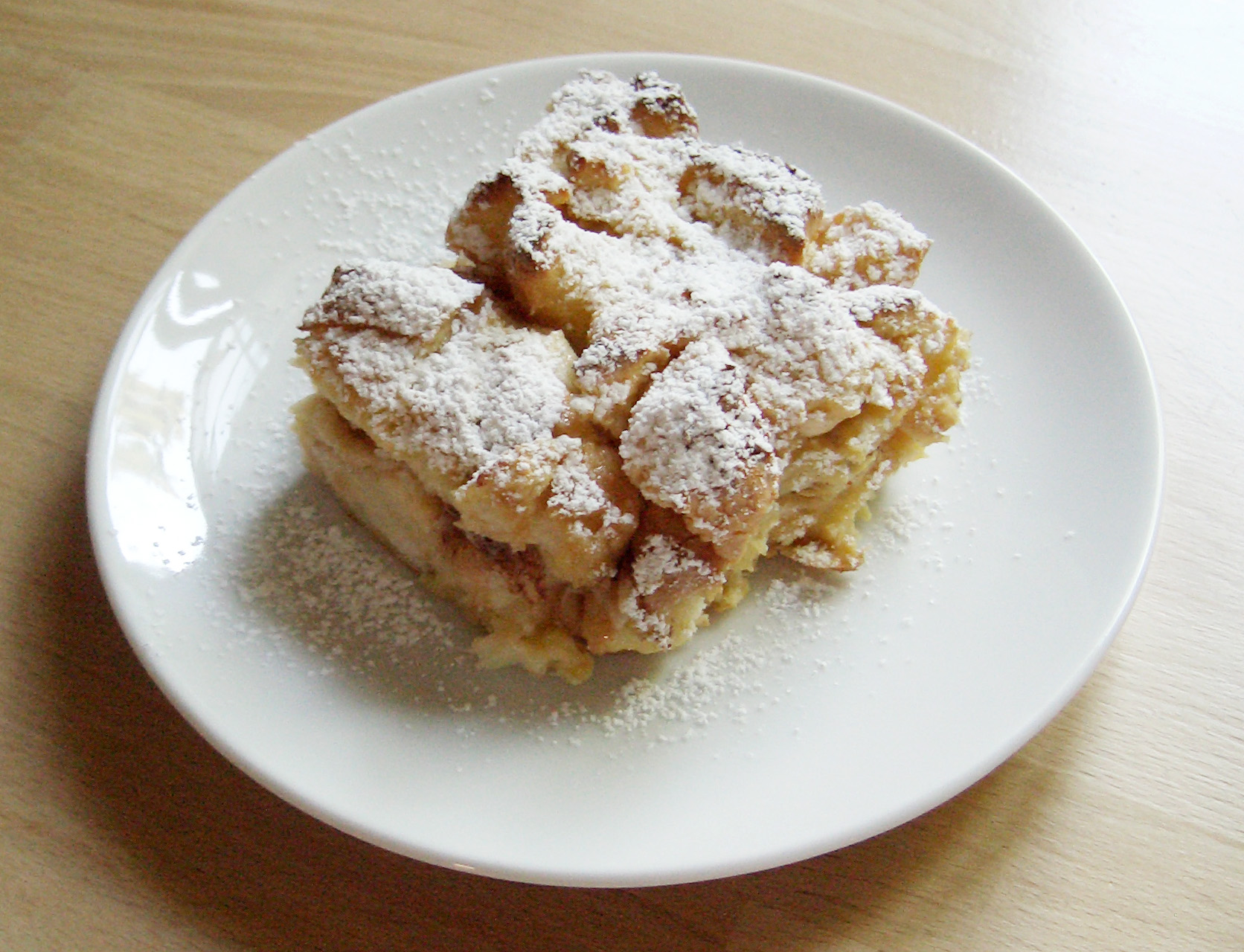 "Scheiterhaufen" (what translates to "stake" - yes, stake, no lost in translation...) is a very common dish, especially with school cafeterias. It's considered to be a smash-up meal, although I think in fact it isn't anymore, but I guess it used to, as it is a way to use old white bread, and apples are to be found en masse everywhere. So it also was kind of a cheap dish. And very often, in schools and at universities it is served on Fridays instead of fish. (Austria has a very catholic tradition, and despite it doesn't really influence most people's life - at least much less than in the States!! - but some habits never dissappear...)


(unfortunately, not a picture of my Apple Bread Pudding, but a Scheiterhaufen by www.lebensmittelfotos.com - looks familiar, huh?)

In Austria, we have a lot of warm sweet dishes that are served as main courses, and "Scheiterhaufen" is one of them. The only difference is that some people serve it with raisin and/or nuts (classical accompaniment for apples), but both is optional. Usually, it is served with a vanilla sauce that is slightly thinner than a Crème Anglaise. In German we call it "Kanarimilch", but don't expect any German to understand it - it is a very Viennes word... (it would translate to "canary milk", due to the colour, but for sure it is much less yellow than a canary)

So this is a big childhood-memory. And a very good one.

I tried Scheiterhaufen once but failed completely. As so often, I have to credit Dorie for her great recipes. And Elizabeth of Cake or Death? who picked the recipe for this week's TWD form Dorie's book (pages 408 and 409).

Today, I am happy, because I just had my test piece, and it turned out wonderful, exactly as it should be.

But don't ask for yesterday. Yesterday was the first day I tried to make it. It took me ages to caramelize the apples (no idea why). I had too less brioche (or ate too much of it...). When I finally found a pan for the pudding, I forgot it 5 minutes afterwards and buttered the wrong pan. My sugar went slightly dense, and then splashed out all of a sudden - much more than needed, for sure. And it splashed on the counter and there on the open package of butter. Salted butter - yes please. Sugared butter? Urks. Two eggs didn't seperate correctly, one I "spread" over the counter, so I had to start anew. When I mixed together the milk and the cream I realized that my pan was already completely full with the brioche and the apples. And then, with the sugar on the butter, a buttered pan nobody needed, milk and cream just shortly before burning, and only about one hour left before I had to leave to a friend's (who I promised to bring the pudding), I accepted that it is not bread-pudding-making day. So I turned of the gas, covered the pan with the brioche-apple-mix to put in the the fridge, tried to clean up the mess, took out the Banana Coconut Icecream Pie I already made for the next TWD-week, and went to my friends house to see the traditional Sunday crime series. Icecream is right at the moment not really appropriate in Vienna - we see the coldest and rainiest May since ages. But I didn't wanted to arrive barehanded.


But the luckier I am today, after my second attempt to finish the recipe. Apple Bread Pudding sounds and tastes a bit like autumn, and that's just what I see when I look out the window...
Thanks to Elizabeth for a wonderful childhood memory - and for sure, this recipe is way better than any Scheiterhaufen I ever had at the cantine!
by alvarosa um 23:46