When I was at university I took a swedish class for a year. I was interested in the language because I generally think of Sweden as a very interesting country. I mostly like how things are run there, and always thought that we can learn a lot from them. I like that politicians and top-managers are never seen as irreplaceable and VIPs. You can bump into them on Friday evening when they are at the movies with their friends and family. (Unfortunately, this also leeds to unwanted consequences, as things like this or that would not be possible in most other countries, due to big security entourages.)  like their way dealing with female participation in the workforce and the involvement of fathers in child-raising and homework-duties. And I am convinced that their open-mindness towards income and wealth transparency is a role-model.
And I think that it sounds funny when Swedish people speak. :o]

So I learned Swedish, but by chance, after the summer-holidays that year I went to Strasbourg, France, for an exchange semester, that ultimately became an exchange year and the basis of my love of France (which was the complete opposite before - my mother's a french teacher. You can imagine all the rest about teenage rebellion against parents...).

But the topic here is Sweden. So, to make it short, I forgot all my Swedish (read: the little bit Swedish I lernt in this one year), and almost all I can say is "min mor är en kassörska", what means "my mother is a till girl" - what is not even true (I seriously have  no idea why I did remind that!), and the most simple things like hello, good bye and thanks.


Nevertheless, I still have very positive feelings towards Sweden, and plan to go there since ages. I love the food corner at Ikea, half of my furniture comes from there, and H&M is, despite my advanced age, a place I often shop. 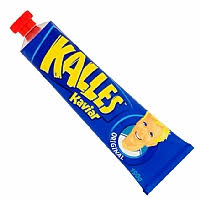 The Swedish Visiting Cake is very swedish. It is clear and sophisticated at the same time, as a swedish designer lamp; easy and quick to put together as an Ikea cupboard; and tasty, tasty, tasty, like Kalles, the caviar-spread, and Marabou chocolate.
I made the whole recipe, but used only half the batter for the original recipe, that can be found in Dorie's book on p. 197. For the other half, I made the recipe with apples that Dorie proposes here. Thanks to Nancy of The dog eats the crumbs, who has chosen this wonderful recipe for us and also linked to the apple-variant! (the recipe can also be found at her page)

The procedure is so easy, not even I could go wrong. I made a test piece with both, almonds and apples, and can't decide which one I like better. The cake tastes as if almond paste or marzipan would be included. I LOVE marzipan! The lemons make a great supplement for that it doesn't become too sweet. As often, the edges were already dark brown despite the batter was still very humid. I put aluminium foil over the cake after about 20 mins, and at least the cake didn't get darker.

The other problem I had was that, well... have a look yourself: I have no idea what happened. I used a tiny little bit of baking poweder, because the apple-recipe forsees some. But even if you use rasing agent, I do not think that the idea is, that the cake builds a mountain...
o:]
Maybe the apples are heavy enough to hold the batter down, but the almonds aren't.
But in the end, I do not think that it disturbs the delight when eating. This is definitely a do-it-again recipe!