This week's TWD pick, the Cocoa-nana bread, came from Steph of Obsessed with baking.
I was pretty excited when I saw her choice, because banana-bread seems to be kind of a "soul-food" in the States, in the sense, that in almost every second TV-series or book, it is used when someone needs a treat to overcome a love-dissapointment, any "the world is mean"-moment, or just to feel comfortable. Characters refer to it is giving them some reminders on parental warmth and childhood memories of a world where everything is perfect, because your world is small and you don't even know that "imperfect" is an option for life...
I never ate, saw, or made it, so I was happy to have an opportunity to try something I have heard a lot of, but wouldn't ever have made without TWD!

Already last week, I was tempted to head to the supermarket in the last minute. Well, more in the last minute -10, as I was already mixing the ingredienst when I recognized that I had no salted peanuts at home.
I am a lazy person, so I took the peanuts I had at home, and roasted them in a pan, and when they were all greasy, I rolled them in salt. And I did add a bit additional salt to the mixture. I didn't miss anything, so I guess it was ok like that. 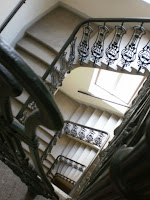 This week, when I was already ready to go and mix the ingredients, I found out that I have (a) no eggs at home, (b) no buttermilk at home. So, the already fluffy creamy butter had to wait, because these ingredients I really can't substitute - this time I really had to rush to the supermarket at the corner.

My laziness reading the recipe thoroughly is combined with another problem - again my problem with converting the measures... When it was time to put in the cocoa powder, I found out that I had almost only half as much as needed. As I just came back from the store I really wasn't in the mood to go there again. (I have to mention that I am living on the fourth floor of an "Altbau", which means in american counting, the fifth floor. And "Altbau" means an old building with very high ceilings. And no, there is no elevator. What means 105 steps. You understand I had no interest in leaving the house again? So I tried to use more chocolate and cut some of it very very finely. (Now I know, it wasn't enough to offset for the missing cocoa. I should have used more chocolate. And chocolate chips, which I didn't have neither as they are not so commonly available at our stores. Next time I will have to cut bigger chunks.)

But the real problem was the following: When I converted the amount of buttermilk, I really, really miscalculated. I used 0,25l. Well, when I poured it in, I was already wondering a little bit if this can be right. But I was so sure... I have to tell that, additionally to converting cups into liters, I halved the recipe. So, maybe that added some more confusion.

My oven usually needs less time than announced in the recipe. So you can imagine my confusion, when the bread didn't get firm in the middle.

The usual, little "master-piece" to taste (the round "cake" you see left and right) was no problem - maybe because I used only a small amount of dough and it was low enough to thicken.

But the "real" bread didn't. Not after 40 min after covering it with foil. Not after 50 mins. Not after an hour. Then I removed the foil, gave it another 10 mins., and finally took it out, because it started to get very dark on the outside.

That was the moment when I started recalculating the amount of buttermilk. What would have been necessary was... 0.09l. Instead my 0.25l. It's like I used 1 cup. Instead of 3/8 cup. Argh!

So, no wonder it didn't work out as announced in the recipe! Nevertheless - what I got (whatever you may call it...) might not be a cocoa-nana bread, but a cocoa-nana-whatever, with a good taste, just a slight touch of banana flavour, and a very humid center. I like humid centers. It looks like a bar of humid-in-the-middle brownie or muffin, but is not as sweet, and with red jam on it it was pretty good.