So, the ultimate reason why I start this blog is that I would like to participate at "Tuesday with Dorie" - kind of an internet-club, where people bake their way through "Baking: From My Home to Yours" by Dori Greenspan.Up to now, they don't know about my aspiration, as I am still kind of too shy to "reveal". But I decided, after following the site some time, I am going to get started, without officially joining yet. What gives me the time to try it out and see if it works for me.

Why I want to participate is easy. I like baking (what I did not really figure out until very recently), I like to become a better baker, and I need some fix dates in my life and commitments, otherwise I never stick to what I once decided.
So, here is the commitment: Blog every Tuesday the recipe of the week. That's all.

Well, on Monday, when I thought about starting this week, I had a look at the recipe of the week.
And decided, to start next week.
Lucky me, in November participants are exceptionally allowed to pick any November-recipe and switch weeks. Lucky me, because when today I read some of the blogs, I found out that the actual recipe for this week was obviously not only too demanding for me. Not that all the others didn't arrive at making it perfectly right. But at least I saw some comments like "it was the most demanding I ever made for TWD", "I never spent so much time for only one cake" or "it was a two-days-project".
So. As I am no official participant I granted myself the right to start on Wednesday and pick out the November recipe that sounded most like I could manage it.

And here we are. Looks like a pizza, you say?
Or a football?


But the second and third tray turned out pretty well. Or, at least I am mostly satisfied with it! And, most importantly, they are tasty! Cookies don't have to look picture-perfect anyways.
(and I am not only saying that because mine don't! ;o]) 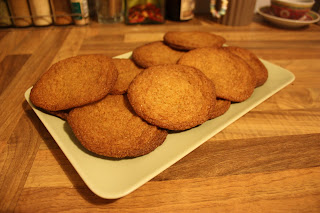 And don't they perfectly match with my kitchen furniture??